Looking at the world through the big data lens 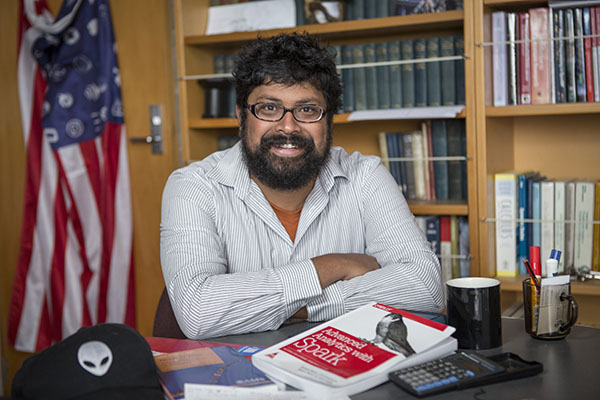 When people misunderstood his poems, he wanted to do something where he could communicate in a way that left no room for misunderstanding. That’s why he decided to become a mathematician.

Raazesh Sainudiin is driven by a strong desire to understand the world, and in his research he has succeeded in combining his interest for society with his command of the mathematical language. With the help of mathematics he has studied everything from biodiversity to dissemination of ideologies. The way in which he does it is new within academia and is called data science.

When Raazesh Sainudiin was visiting the mathematical logic group in Stockholm last year, he heard that the department of mathematics in Uppsala was looking for a researcher who would work partly at the university and partly at a company. It sounded exactly like the job he was looking for so he decided to apply.

At the time, Raazesh Sainudiin lived in New Zealand, and he had just returned to academia after spending some time in the industry. He had taken a leave of absence from his job at the university for a period of time to work for a company. The company was just starting up and needed people skilled in data science. There he led a team of engineers and researchers who developed a product for security organisations such as Interpol and Australian Federal Police.

“I can’t tell you so much about it because it's confidential, but it was a problem that involved data fusion. I really enjoyed it”, says Raazesh Sainudiin.

When it was time to return to his job at the university, Raazesh Sainudiin feared that he would lose contact with the industry. He wanted to continue working within academia because he appreciates the freedom it provides to think about problems in depth, but at the same time he was afraid of losing touch with the latest developments in data science.

What is data science?

“Whether you're in a lab doing experiments or in a company observing behaviour of customers, the amount of data you can collect is way bigger than what we can actually analyse with computers. That's essentially the problem. Traditionally you would have your own computer, your PC, where you’d analyse the data. But now, the data will not fit into one computer, so you have to put it in lots of computers and then somehow analyse them at the same time. In computer science it's called distributed computing.”

Raazesh Sainudiin explains that data science doesn’t only involve computing and programming but also collection and analysis of data. Therefore, a data scientist needs to be skilled in three fields – mathematics, statistics and computer science.

“The interesting thing with data science, or big data as it’s also called, is that a lot of the technology comes from the industry. Many core technologies were developed out of necessity by companies like Google and Yahoo. For example, they came up with their own distributed file systems to handle big data. What’s made the development possible is that these technologies are open sourced, which allows anyone in the world to help develop the code and the technology publicly, in an open way. So everyone benefits from it and can make money from it.”

How can you make money out of it if it’s open sourced?

“A lot of it will be open sourced, the core of it, but there will always be some secrets that the company will have. That’s on the industry side. In most academia, data science is a new term. It was actually coined just a few years ago by engineers at companies like Netflix. They said: We don't quite want a statistician, we don't quite want a mathematician, we don't quite want a computer scientist or a data base manager. We want somebody else. Somebody who not only knows enough mathematics, statistics and computer science but is also interested in the business process, because at the end of the day, you have to make money. So this unique industrial need kind of defined the field.”

Raazesh Sainudiin became interested in what would later be called data science after his doctoral studies at Cornell. He was away for a post doctoral fellowship at Oxford and a senior lectureship in New Zealand for nine years, and when he came back to Cornell for a sabbatical he started attending machine learning, statistics, and probability seminars. That was when he started to see connections between mathematics, statistics and computer science – the very foundations of data science resonated by industry.

Raazesh Sainudiin’s ability to use the language of mathematics to understand how different domains can be connected has made his research very versatile. In one of his research projects, he has analysed millions of posts on Twitter and tried to find out how ideologies spread. In another project he spent a month on a remote South Pacific island where he, in collaboration with behavioural ecologists, studied population genetics of bird behaviour. In a third, he’s been developing computer programs in statistics and simulation with the mathematical logic group in Stockholm. His research interests involve many areas, but one of the things that connects them all is data science.

“I can't read a journal anymore to find out what's happening. To find the hottest things I have to watch videos that webcast live from different open source projects. It's completely different since I was a student”, he says and continues:

“I tried to find a joint position in New Zealand, partly in industry, partly in academia, but it was impossible. So I was excited last year when Warwick Tucker told me that the department of mathematics in Uppsala was looking for someone like me.”

He got the job at Uppsala University and it has proved to be in line with his expectations. He works at the technology company Combient once a week and at the university rest of the time. The main goal is that cooperation with Combient will be of benefit for both sides.

“A big part of my job at Combient is to make sure that  there is a flow of ideas both ways. On the PhD courses in data science that I’m giving this fall, students will learn a simpler version of the tools that we use at Combient. If I continue teaching the courses I’ll change them as the technology changes.”

Which students do you think will benefit from the courses?

“PhD students in various branches of engineering, physical, life and social sciences, including IT, for instance. My courses will mainly focus on the data science process, which is this strange mix of mathematics, statistics and computer science, with a little bit of business insights, and some attention to ethics and laws”, says Raazesh Sainudiin and continues:

“The influx of ideas will be more to teaching than research. On the other hand, I'm currently doing more research in the big data space, like the twitter problem. So of course, that technology will be useful for my research as well.”

Although Raazesh Sainudiin appreciates working in the industry, he also likes being in a purely academic environment. He explains that one of the biggest reasons he wanted to come to Uppsala University was that he would have the opportunity to work with mathematical and statistical researchers.

“Because I work in so many areas it's a perfect place for me. For example, Ingemar Kaj’s group's works on models that are close to my research interests in population genetics. When I’m analysing all of this twitter stuff I hang out with Cecilia Holmgren’s group a lot. Cecilia is very good with random graphs. She’s a rising star, definitely. People in her group aren’t directly doing big data, but they have a lot of insights that are helpful for bouncing ideas over lunch breaks. And when I work on computer arithmetics I hang out with Warwick Tucker’s group. Currently, I am viewing mathematical research problems through the big data lens. Although this view will not necessarily be of immediate interest to researchers in the big data community, it will be of interest to those in mathematics and statistics communities.”

Exchange of ideas and collaboration seems to run like a red thread through most of Raazesh Sainudiin’s work. In addition to his many research projects, he has also designed a granite sculpture now standing at the Chennai Mathematical Institute in India.

“It has water running down in channels that split and merge back in twos over and over. It was an homage to an ancient Indian mathematician, Pingala. He came up with a version of what we today call Pascal’s triangle and Fibonacci numbers nearly 2200 years ago.”

The fact that the statue stands in Chennai is not a coincidence. Raazesh Sainudiin was born in the city and lived there until he was seventeen years old. Then he moved to Minnesota, where he, long before he knew that he would move to Uppsala, established a special relationship with Sweden.

”In Minnesota, I went to Gustavus Adolphus College, a Lutheran liberal arts college, founded by Swedish immigrants. They had a scholarship, to Folke Bernadotte’s memory, which went to one student from South Asia every year and I was actually a Folke Bernadotte Memorial Scholar. So I have this crazy Swedish connection.“

What do you like do on your spare time?

I enjoy experiments in the kitchen that challenge culinary conventions with my wife and daughters, field plant taxonomy, poetry, pluralisic histories, comparative philosophy, and tongue twisters in English, Sanskrit and Tamil.

Dogen Kigen. He’s the founder of the Japanese School of Soto Zen. People don’t call him a poet but it’s just his words I like.

What do you think about Uppsala?

It’s a very nice place to live and raise a family.

You have lived in many different places. Where do you feel most at home?

I would feel most at home at home with my loving family. Regarding which nation state I feel most comfortable in – it’s more complicated… See, I was born in India, grew up in America and settled in New Zealand. I’m a citizen of New Zealand and I really like it. I feel like I’m an Indian-American Kiwi.